The first roundabout to receive the attention of Halesworth in Bloom was the Triple Plea roundabout at the north edge of town, sharing both an industrial and a rural aspect. It had been laid to grass and was managed by Suffolk County Council.

In the spring of 2013, the roundabout was planted up by sponsors Woottens Plants in partnership with Halesworth in Bloom. Woottens is an established plantsman’s nursery specialising in hardy perennial plants, many of which are propagated on site. The aim was to provide maximum visual impact and all-year round interest; to showcase a wide range of quality long-lived perennial plants; to be low maintenance and sustainable; to harmonise with the local environment and provide a wildlife haven. Crucially, as it is not possible to regularly water the site manually, all the plants needed to be tough and drought resistant.

Central to our planting was the edict ‘Right Plant, Right Place’ – choosing plants that naturally grow well in the conditions of climate and soil available. A selection of hardy perennial plants was chosen, and these were supplemented with grasses and bulbs to provide additional interest and diversity. Over the years the planting has matured successfully. Digitalis ferruginea, Foeniculum vulgare, Alchemilla mollis and others have all successfully self-seeded, providing interesting new plant associations, filling gaps and injecting change into the planting scheme. We have also allowed some native wildflowers to seed and establish amongst the cultivars. The site requires minimum weeding because of the density of the planting. In order to maintain winter interest and provide food and shelter for wildlife we delay cutting back until spring, giving some plants the chance to self-seed. In 2016 we added a selection of Wootten's own-grown Bearded Iris into pockets of soil that were particularly arid and exposed to the elements.

The roundabout created a lot of interest amongst both residents and visitors to the town and we subsequently successfully applied the same principles to the three other town roundabouts – by the United Reform Church at the top of Quay Street, by the Angel Link car park, and by the Co-operative store to the south of the town.

Over and above road safety, there is an extra reason to take the underpass from the Thoroughfare Car Park to the Town Park: the path leads between three borders that offer interest whatever the season.

Planting here has aimed at creating structure and colour in the winter months when these are at a premium. The blossom on the winter-flowering cherry breaks as early as November – before even the January pink of Viburnum bodnantense, planted here to contrast with the vivid winter stems of red, green and yellow dogwoods. Gigantic silver-leafed cardoons are stately for all twelve months of the year. And, at the road edge, multi-stemmed silver birch trees, Betula jacquemontii, form a pretty screen between the road and the park beyond.

Much of the herbaceous plant stock has come from volunteers’ own gardens, so the look here is informal but with a few surprises. There are Rosa rugosa planted many years ago by the District Council, held in check from over-running the site but as valuable as the self-seeded Welsh poppies, Nigella and Cosmos that, thanks to attentive weeding through the year, add more charm and interest.

These three maturing beds of mixed tree, shrub, perennial and annual planting are hugely appreciated by the many people who cross the park on their way to work or to the Thoroughfare shops – they tell us so whenever we’re working there! 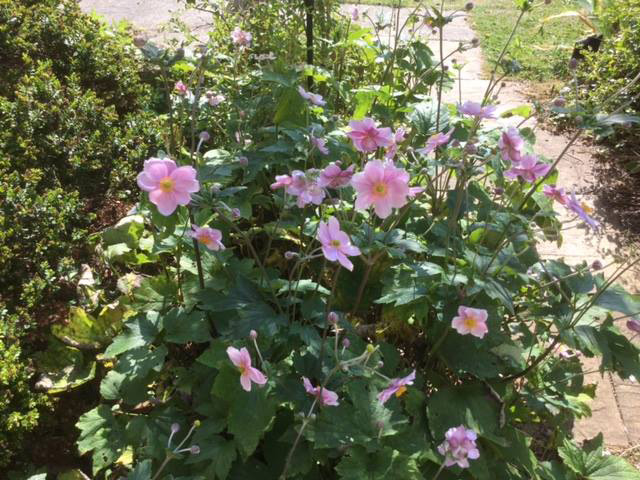 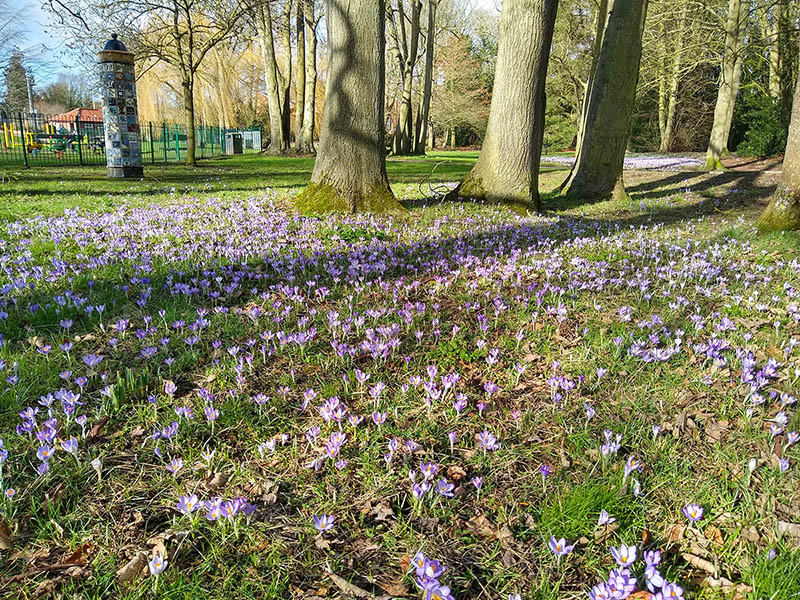 A derelict area around our war memorial was reclaimed from brambles and dead shrubs in 2013 and has become a garden for reflection. The old Edwardian shelters are now decorated with delightful poppy fields (painted by ASBO youngsters under artistic guidance). The shelters look out on all-year-round herbaceous borders under trees planted in 1903 as a group for a Hooker Arboretum. Plants associated with Joseph Hooker are grown here, as well as David Austin pink furled roses named after Joseph’s granddaughter Josephine. 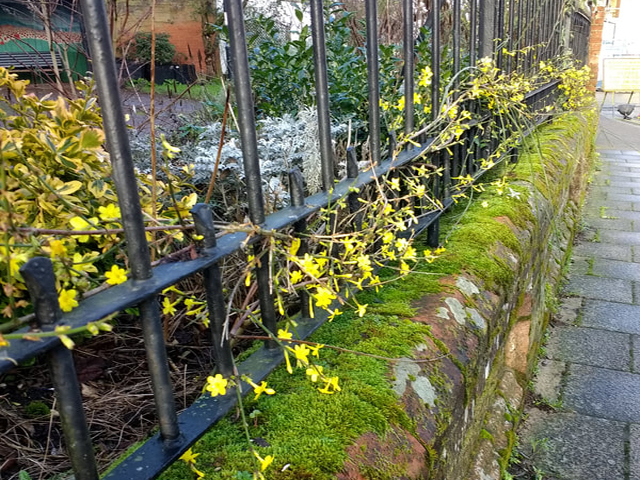 The Thoroughfare was pedestrianised in 1991 and this has created a wonderful place to wander, browse, meet friends for a drink, or buy from wonderful local independent shops. Our planters have small crab apples together with Tete-a-Tete narcissi in the spring, herbs, heucheras and some bedding and look good throughout the year. The businesses’ floral entrances are a talking point and source of delight. Virtually every business participates, and Halesworth in Bloom helps where necessary. 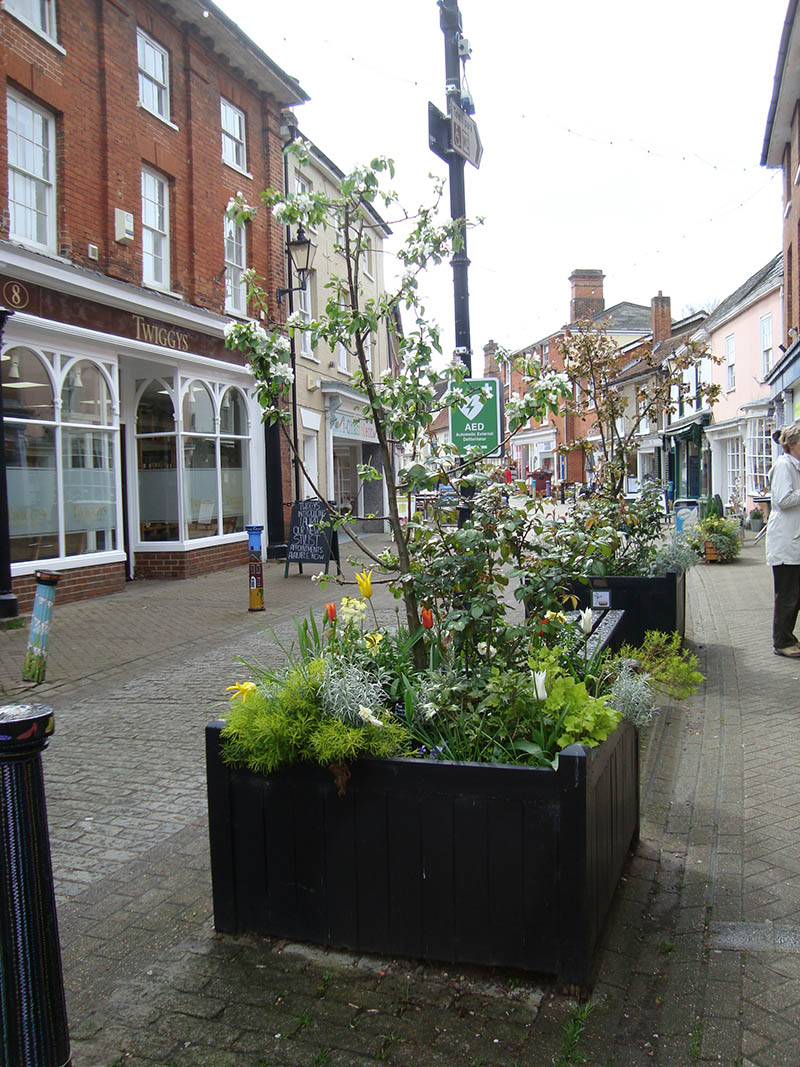 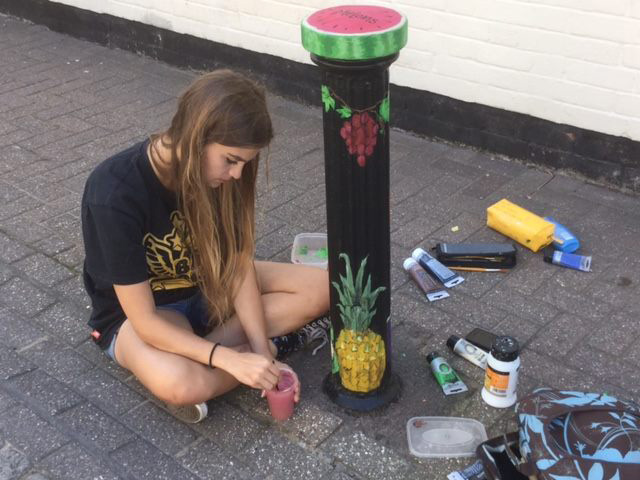 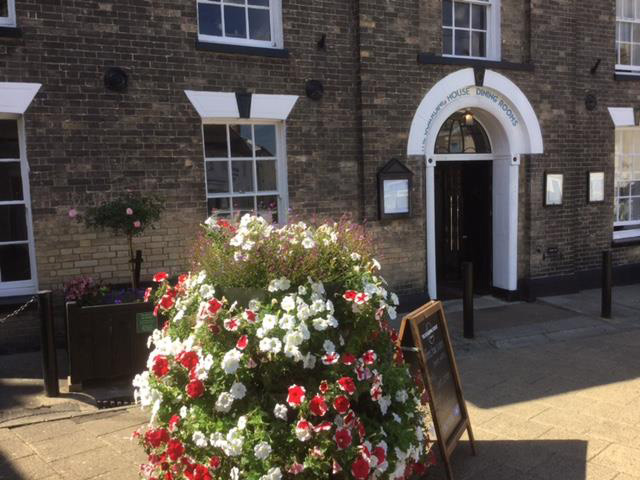 Halesworth Cemetery opened in January 1855 and closed to all but family burials at the start of the 20th century. The entrance is on Holton Road, and you will see a chapel each side of the main access road, which is lined with shrubs and trees, some of which are over 100 years old. The chapels were refurbished in 1988 by Woolnoughs Funeral Service, now part of Co-op Funeralcare. The chapel on the left was used by Anglicans, who were also buried to the left of the main path in consecrated land; the chapel on the right was used by Nonconformists, who were buried in non-consecrated ground to the right.

The northern section of the cemetery is managed for the benefit of wildflowers. Following the snowdrops, cowslips and primroses in the spring, the grassland is dominated in late summer by ox-eye daisies, knapweed and quaking grass. Butterflies are abundant, feeding on the profusion of wildflowers. Botanically it is important for two species of rare fern, the maidenhair fern and black spleenwort, which grow on the retaining wall between the north and south sections of the site. The southern section has several beautiful mature trees and thick hedgerows. This makes it a good site for birds; small nest boxes have been put in place to encourage a variety of passerines. Reptiles spotted include slow worms, grass snakes and common lizards. 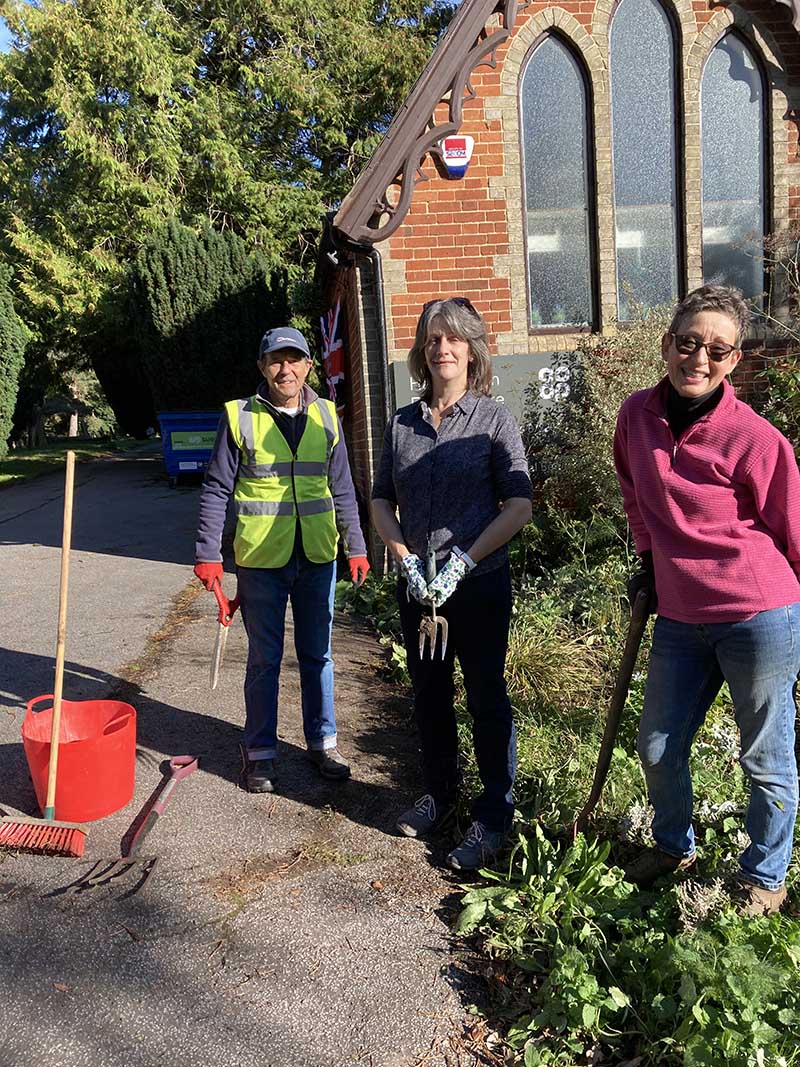 In tribute to Joseph Dalton Hooker, Halesworth in Bloom has developed the Hooker Trail, showcasing many of the plants named after Joseph Hooker in the floral displays around the town. A leaflet is available from the Tourist Information Points at Halesworth Library and The Angel to guide you around the trail and listing all the plants associated with our famous naturalist that can be found along the way.